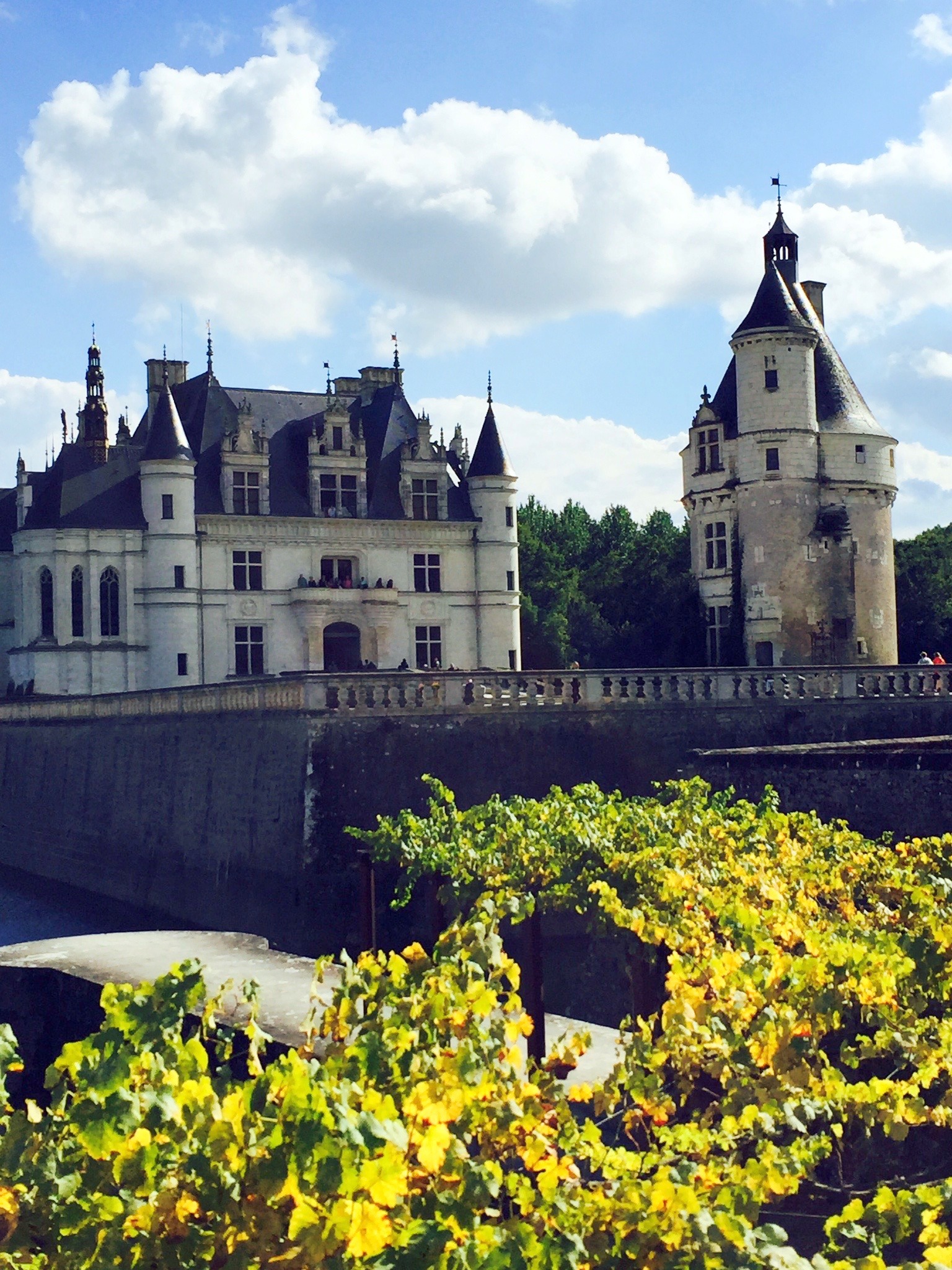 It seems I missed a huge portion of European history in my education.  French Kings apparently were seriously prosperous for a very long time.  The Loire valley shows lots of evidence that the royalty had major access to cash and artisan laborers (probably peasants without any other means of eating, but let’s not get political). Before coming to the Loire Valley, I had no idea that this place was so riddled with castles.  They are everywhere!

Let me begin by saying that the Loire is a river, and the plains surrounding the river look very fertile with lots of crops and animals everywhere.    The roads are flat and perfect for cycling, and many seem to come here for that purpose. Here in mid September, the weather is warm but cool enough for a sweater or light jacket.  I have just missed sunflower season, because the flowers are all dying on the stems, but a few weeks ago I’ll bet they looked like this.I can imagine that late August must be spectacular for sunflower gazing. When in Loire, it seems that visiting castles is a must.  I was feeling a little slow, so I didn’t try to get to more than one.  The castle of Chenonceau seemed to be a favorite with bloggers and my concierge, so that’s where I went to visit.  This is what it looked like as I walked up. Pretty impressive, right?  It’s pretty from every angle.  Along the back, the castle spans the river with a gallery/bridge that also served as a ballroom. The river runs beneath it.  That long passage across the river marked the boundary between Vichy France and Free France.  During WW2 there were efforts to help people escape through this passage. The entire space was transformed into a hospital for wounded soldiers during WW1. Since I was there late in the day, the light was gorgeous and I took a few photos. The gardens at Chenonceau

I found a comfortable place to sit with a good view, so I had to try to paint something (of course!).  Since time was short, I decided to abbreviate the subject and just do the smaller tower.  It looked like a place where Rapunzel might have been kept and I thought I could get it done in the time I had.  This was my view and my set up. I may add a few of the bright flowers that were in the foreground at some point, but this is what I came away with when the tape was removed. Since it’s not something you can do everyday, on the way out I went into the labyrinthe.  The grounds are gorgeous and would make a super picnic location.  There is even a restaurant on site if a picnic is too much trouble.  I’d love to come back and paint here again someday…

The city of Amboise also has a castle known as Chateau d’Amboise. It looks out over the town and the Loire.  I went there because I heard that so many French kings had resided there, and that Leonardo Da Vinci was buried there.  I honestly found it less than inspiring.  The town is loaded with restaurants and shops, but they seem primarily tourist oriented rather than authentically French.  Here are a few photos, but I might skip this one and spend my time at another location next time. Here are a couple photos from Amboise.  It photographed nicely despite my mediocre experience there. The chapel at Amboise- Leonardo da Vinci is buried here When I come next, wouldn’t it be fun to bring a group to bike and paint?  Those active types who aren’t so interested in sitting and painting could hop on a bicycle and meet us somewhere for dinner, while those of us who want to paint could drive and spend a little more time in one place.  Hmmm, I feel a plan forming…Anyone interested????

I’m off to Arles where Van Gogh painted next.  Stay tuned and stay in touch!